DWFI at the world exposition in Milan

The world universal exposition was held in Milan from May 1st to October 31st. The interior design company DWFI performed several pieces for the Russian pavilion commissioned by the architectural bureau SPEECH.

The exposition is held every five years and demonstrates scientific discoveries and achievements. This year, the countries that took part have demonstrated their abilities in the field of food safety. The Russian pavilion showed the agricultural potential of the country and introduced the guests to Russian culture and cuisine. The pavilion was visited by over 4 million people, and on June 10, the Russian President, Vladimir Putin took part in the opening ceremony of the National Russian Day.

The architectural concept of the pavilion was created at Speech bureau and our company was responsible for the interior filling. This joint venture resulted in bronze medal for best design at the exhibition. 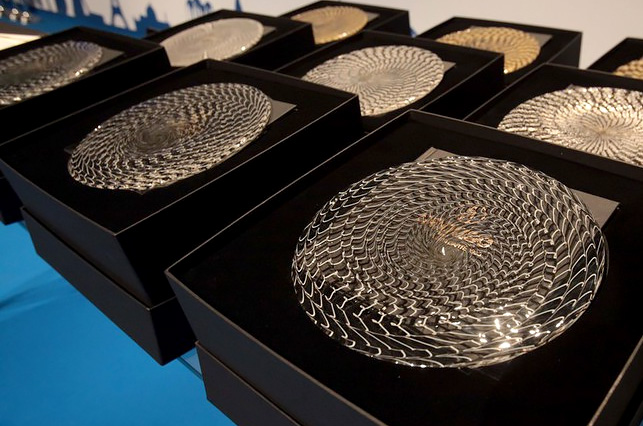 We designed a reception desk, a showcase for exhibits and furniture at the café of the Russian pavilion. Assembly work was performed almost round the clock. The mounting team arrived in Milan late at night and started working immediately.

The desk welcomes guests and should conform to the overall style of the exhibition. The vertical panels of the desk and oval shape copy the sharp rhythm of the building facade.

The journey along the pavilion began with a showcase more than 3 meters high. It displayed several exposition articles, including a map of Russia made of cereals. The greatest difficulty was to install the glass frame weighing nearly 350 kg. We managed to mount the showcase and reception desk in one night.

Furniture at the café

We designed and assembled almost all the furniture of the cafe: the bar and cabinets with oak veneer and black enamel. Wheat ears were placed between the slats of the bar, symbolizing the agricultural potential of Russia. Also, for the restaurant, in the style of a restaurant-wagon, we made window frames from liquid metal.

We have been cooperating with the architectural bureau SPEECH since 2009.